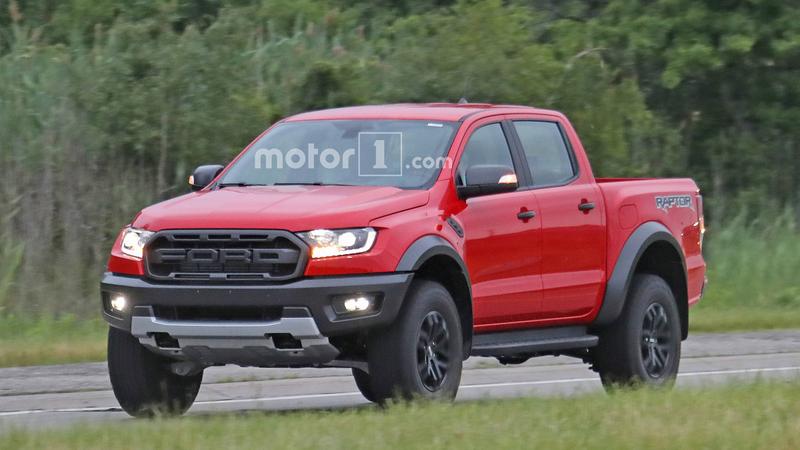 The 2019 Ranger marks Fords return to the midsize pickup segment after nearly a decade hiatus. To our surprise, however, they also announced the top end Raptor would remain exclusive to Europe and other foreign markets for the time being. Their rationale has been that it would be too costly to make the Ranger Raptor comply with U.S. regulations as its largely based on the international T6 platform. Chances are, Ford fears that launching this new model in their home market could cannibalize sales from the larger and more profitable F150 Raptor.

Everything seemed to point to the fact that it was coming to the U.S. from surfaced patent images to leak spy photos of test mules spotted across the country. Some automotive publications have already traveled overseas to get some hands-on time it to determine whether U.S. customers are missing out on this new premium off-roader. Turns out, yes they are.

As the Ranger Raptor has a much smaller footprint than that of its larger sibling, it would serve as a more manageable vehicle both on and off-road. When you consider the Fox shock absorbers, rear Watts linkage, Terrain Management system and its raised ground clearance, there are very few scenarios where owners would find themselves stuck.

Ford would have to place a different engine for this market because the 2.0l four-cylinder bi-turbo has already been criticized for lacking in the power department. 201 hp and 369 lb-ft of torque look great on paper, but the Ranger Raptor is still a heavy vehicle and overtaking while at freeway speeds could still pose a problem. Ideally, they should consider a smaller V6 such as their 2.7l EcoBoost.

Now, this is where things start to get a little crazy. Ford has outlined a starting MSRP of around $74,000 before on-road costs. That is a big ask for an over-stressed 2.0l diesel. If they do decide to bring it stateside, it will have to be much closer to what we see on models like the Colorado ZR2.

Its a big shame that Ford cant find a way to bring their hallmark truck to the United States, especially with the growing interest in high-performance trims. A successful launch of the base model could just be the push Ford needs to reconsider.
Administrator is offline
Quote
post #2 of 11 (permalink) Old 12-21-2018, 09:17 AM
Darion
Senior Member


Join Date: Jan 2018
Posts: 270
It is odd that it was spied in LHD while Ford had no interest in releasing it for NA. I think that's a direct result of both the pricing and finding the proper powerplant for it. That turbo diesel wouldn't cut it here.
Darion is offline
Quote
post #3 of 11 (permalink) Old 12-21-2018, 01:18 PM
FoMoCoFan
Senior Member


Join Date: Jan 2018
Posts: 324
I don't understand how this would cause problems with the F150 when Ford can't build them at a pace consumer demand is at. Instead it could help retain some potential Ford customer base that would have gone elsewhere. Then there's the other missing fact of the T6 platform, its old. This article all but covers it, an essential piece that could mean a next gen Ranger will be a U.S. destined Raptor


Join Date: Jul 2018
Posts: 98
If all midsize trucks end up providing more than 7,500lbs of towing then this could be the case. I think buyers will also welcome the improvements to fuel economy that we are seeing with the 2.3l Ecoboost.
Texx is offline
Quote
post #7 of 11 (permalink) Old 12-28-2018, 09:20 AM
Darion
Senior Member


Join Date: Jan 2018
Posts: 324
Quote:
Originally Posted by Texx View Post
If all midsize trucks end up providing more than 7,500lbs of towing then this could be the case. I think buyers will also welcome the improvements to fuel economy that we are seeing with the 2.3l Ecoboost.
Crossing over to 8,000 is going to be challenging from any OEM spec offering and also exceeds what most owners need.
FoMoCoFan is offline
Quote
post #9 of 11 (permalink) Old 12-29-2018, 11:58 AM
Caine
Senior Member


Join Date: Jan 2018
Posts: 286
Diesel tech is on its way out, so rivals are going to have to start developing more efficient systems that can match Ford's EcoBoost tech. Ram has already debuted their new mild hybrid system.
Caine is offline
Quote
post #10 of 11 (permalink) Old 01-02-2019, 06:13 PM
FoMoCoFan
Senior Member


Join Date: Jan 2018
Posts: 324
Diesel comes down to long-term ownership as that's where the real benefit is, but even that's diminishing.
FoMoCoFan is offline
Quote